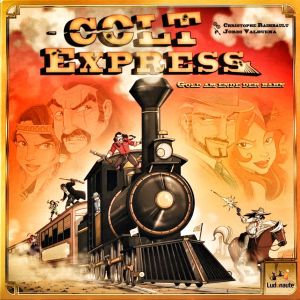 This week we played the newly acquired Colt Express which I picked up from Waterstones. A goodly amount of a previous evening was spent assembling the train, and such fun was had doing that.
Thankfully the box came with some special compartments for the assembled train so game set-up was very quick. The extra pieces of scenery, which added nothing to the game play, excepting having to right the occasionally toppled cactus, added to the western feel.
3 games were played.
In the first two games, MC tried his hand at Tuco (Red), whose speciality was shooting through the roof; PH had a go at Cheyenne (Green), with her ability of nicking purses off successful punches; PM was motivated by Doc (Blue), who starts with an extra card in hand.
MC was victorious in game 1 having obtained the lockbox and the gunslinger.
The victor of round 2 was PH, owner of the lockbox and gunslinger (along with MC).
Round 3 saw a change of characters.
MC became Belle (Purple), too pretty to hit or shoot (unless there’s no witnesses).
PH became Django (Black), who adds knockback to shooting.
PM became Ghost (White), who plays the first card face-down each turn and went on to win, with all 3 players being gunslingers (MC’s only points this turn).

This game was very well received and will definately feature here again.