This year I went to a Games Expo for the first time ever.

One game that caught my eye was Lander.
It’s still in the prototype stage set for Kickstarter in 2018, but looks very appealing. I was allowed a small dark blue 3D printed component.

Of course you can’t go to a games expo and not play any games.
Beasts of Balance was the first one I got to try out. I’ve been watching this one since it’s prototype days and have been wanting to give it a go. 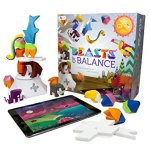 Next-up was the new multimedia game:

.
It’s a trading card game with an accompanying free app with articulated and equippable figures that can interact with the game. We had a go at one of the mini games using the figure as controllers. It can be played for free on the app without the figures.

I was encouraged to have a go at Stak Bots by DogEared Games. I’d already picked up the yellow expansion but never played it. Walked away from this with the base game and the red expansion.

Finally, we had a play of one scenario in the Walking Dead: All Out War. A miniatures game of zombie survival by Mantic Games. With numerous expansions and scenarios to play through. Based off of the comic series not the TV one.

Survived the encounter with all the living still alive and as a draw with SC who managed an excellent double head-shot with a baseball bat.

All in all it was a good, eye-opening time. Very glad I went.