It’s that special time of the year again, so off we trot to:

We only did the Friday where it’s supposed to be “quieter”, not so sure about that, but I digress.
The morning was spent shopping and just walking up and down the aisles looking at lots of game-related stuff (and some stuff that was not game-related). We were impressed by the greater variety of wares than seen in previous years. Many stalls had a good collection of items the other stalls didn’t stock.
Our first proper stop was at the always amazing GamesLore where I picked up a game for a friend (not saying what as it’s a surprise), one of the few copies of 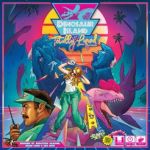 at the show (and the main item on my shopping list).
Elsewhere (and I can’t recall all the places I bought stuff-sorry), I picked up another game on my shopping list, a game we tried at the TableTop Gaming Live event last September:

Here they were also demonstrating the Disney baddies game Villainous and its first expansion (due out this August). (Get Photos from Sabrina).
White Wizard Games were there with a wonderful stand, courtesy of Eclectic Games full of stuff and Rob Dougherty himself was there demonstrating his new game Sorcerer (which I already got via Kickstarter). There I picked up the fantasy version of Star Realms:

as well as the five character packs:

I also thought I’d picked up enough matching card sleeves to sleeve the lot, but I think I’m one pack short.
From there I also picked up this beauty:

As they didn’t have any for Star Realms or Hero Realms for some reason. This came a bunch of matching card sleeves and a promo card too. Oooooh!
They did have some very nice playing mats, and I caved in and got this one:

Very nice it is too.
Lunchtime called so I partook in a Beast Burger while Sabrina enjoyed a Hazelnut Latte and a bowl of chips.
Refreshed and refuelled we set forth once more with the view to playing something.
The first game we tried our hands at was Seekers of Asterod:

Despite the awful and cumbersome pizza-style box, this Cludo-style space game was actually not all that bad. Not much substance to it, but a fun little game of narrowing down clues to be the first to find the correct planet. As it’s remotely linked to Cludo, Sabrina won.
Providing further proof that you can’t judge a game by its cover or artwork we had a go at Fireworks:

A game where players construct a pretty fireworks display on their boards by chucking a big die at a pile of tiles and collecting the number rolled if any tiles flip over. A game designed to have players spending most of their time under the table retrieving game components. Also the pretty artwork is not easy to make out the two very similar styles of explosion (a non-jaggerdy one and a jaggerdy one). The obviously translated instructions are also not easy to read. Not so impressed with this one. Sabrina one.
Finally we had a go at Ghostbusters: The Card Game:

In this set-collecting game, players take turns playing cards to move the trap and then trapping the card it finishes at. Some cards are slimy and will deduct points to the player with the most, unless they also have Slimer.
Thematically, not really that Ghostbustery, but the artwork was fun, the game-play was easy to pick up and there was enough in it to keep it interesting. A good filler game. Had there been a copy of this for purchase, we might have picked it up.
Two games I was looking out for were Tiny Epic Mechs and Tiny Epic Tactics, but after consulting the good ol’ internet, I learned they’re not out yet.
One stall that surprised us was one sporting a load of Pillowfight Warriors goods. Not so much soft toys but more like actual pillows or cushions shaped like weapons and shields looked fantastic. Thinking of the boys we bought a pair of swords.

After subsequently hacking at family members over the course of the weekend, we may well invest in some more gear from here. They were hugely successful.
Two items that we’d seen earlier were calling to us, so we tracked down a copy of:

that Sabrina liked the look of. I’d bought her the original Herbaceous at last year’s Expo and she’d enjoyed that. This one seems to follow the latest trend of being redone as dice.
I’d previously acquired a few copies of Keyforge, but had yet to get a starter set with the extra bits and counters and stuff. Eventually, I managed to find one of the rapidly dwindling copies of:

from the good people at Zatu Games. Apparently, the UK have had their orders for this title reduced across the board, so there’s less copies about than expected.
This contains my first Age Of Ascension, but has the improvement of the original starter sets in that the 2 decks contained within are standard unique decks rather than specially constructed decks.
On the way out at the Expo Merch desk, we also picked up this nifty poster:

I did a vlog on this too, more of the same but more waving about at the camera: