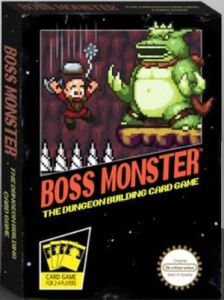 The object of Boss Monster is to win.
Winning is achieved by having the most Souls and not getting killed.
This card game comprises of:
A Boss deck
A Room deck
A Spell deck
A Hero deck
An Epic Hero deck.

Each player is dealt a random Boss, 2 spell cards and 5 room cards (two of the latter are then discarded).
Simultaneously, each player then reveals a face-up room card and places it to the left of their Boss (the idea being the construction of a 5-roomed dungeon for the hapless heroes to traverse). Effects triggered by these cards are then resolved and then the 1st play begins.
Each play starts off with the matching number of hero cards being revealed as there are players, and each player taking a room card.
Players then simultaneously reveal and place a second room card, either to the left of the existing room or on top of it.
Each room card has a damage value (the hero loses that much health moving through it) and a treasure value. There are four different types of treasure and the player with the most of each type will attack all heroes questing for that treasure. However, there is a balance between attracting weak heroes doomed to die in your dungeon (gaining you Souls) and strong heroes who’ll mightily breeze through the dungeon and dealing a wound against the Boss Monster.
There are two main types of room: Normal and Advanced. Normal rooms can be played directly onto other rooms or onto the table top (not exceeding 5 rooms in all). Advanced rooms can only be played on existing rooms with a matching treasure type.
Once revealed and any actions triggered by the rooms have been completed, the heroes are then moved to the ‘entrance’ of the players with the most matching treasure. If there’s a tie, those heroes remain in wait.
Heroes then, one at a time, run the gauntlet of that dungeon and survive, or not. Spell cards may be played by any player, to help, or hinder the hero. If a Boss takes 5 wounds (5 heroes survive the dungeons) that player is out of the game. If a Boss has 10 Souls (10 heroes die in the dungeons) that player wins.
Game time: 20-30 minutes.