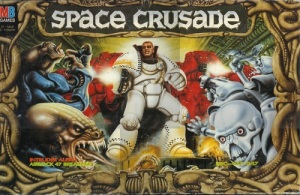 Game time 1hr+ a mission.
The aim of Space Crusade is to win.
Winning is achieved by either having the most Victory Points or being promoted to the top rank – depends on the game type. One-Off or Campaign.
One-Off games are played by those who only play this once in a blue moon and don’t have all day to play it. Campaign games are played by those who play regularly or all day or are otherwise able to keep track of previous Missions (rounds).
1-3 players play as Space Marines and one player plays as the Alien Hoard.
The Space Marine players each get a Commander with Commander weapons, four Space Marines with more weapons, Order cards, Equipment cards and a scanner which denotes Commander health (most units are instantly killed when successfully hit, apart from the Commander who has 6 HP), how many Victory Points lost and which weapons have been augmented by the cards.
The Alien player gets to choose a mission from the missions book, then set up the four boards of corridors and rooms as depicted in the mission book, the four main dividers and all the doors in their stands. The event deck is shuffled and the prerequisite number of alien Blip tokens and Reinforcement tokens are collected. The Primary Mission is read out to the Space Marine players.
The Space Marines need to achieve the Primary Mission then return to their starting location and the Aliens need to stop them.
Each player takes it in turns to move up to all of their playing pieces the allotted spaces and attack the enemy. Attacking can be done as ranged or hand-to-hand, the strength and effectiveness is determined by the armament of the Space Marine or the Alien type.
Attacks are determined by rolling two dice; white for weak attacks (max roll of 4) and red for strong attacks (max roll of 6). Some units can use all four dice in a single roll (max roll of 10). If the roll is greater than the target’s armour it is killed or loses a life point.
Points are gained for every successful kill and Space Marines lose points for every fallen squad member.
Space Marine players can shoot each other if they wish. No points are gained (but the victim loses points). This is generally frowned upon. The fact that some of the Alien units are particularly tough and the sheer numbers of the Alien hoard (particularly where reinforcement tokens effectively double the quantity of Aliens), does encourage a bit of collaboration at least until the Primary Mission is achieved. There is also a secret Secondary Mission which is awarded to whoever stumbles upon it.
Event cards played during the Alien’s turn can drastically change the situation for any player.
The game ends when:
all the even cards are played through,
the Primary Achievement has been achieved and the surviving Space Marines are back at their starting area
all the Space Marines are dead
Points are counted up and deducted.
In a One-Off game the winner is the player with the most points – if it’s a draw between Space Marines, it’s the player with the most still standing and then the player with the healthiest Commander.
In a Campain Game the player with the most points gets promoted and all players are awarded tokens according to their score – 4 tokens buys a rank. Several missions are played and the first player to attain the top rank is the winner.